SURVEYORS and RAILROAD RIGHT -of- WAY

This is an introduction to how railroad corridors are assembled and acquired. The railroads in the United States are well documented. Unfortunately for the surveyor, there is also an unfortunate history of misinterpretation on how these corridors were established based on wild guesses, poor assumptions, local hearsay, blunders and occasional lies by those outside the railroad industry including title companies, attorneys, landmen, engineers and others. Focusing on Missouri and to a lesser degree, its surrounding states, common pitfalls will be examined and discussed. From the early railroad days of 1847 -1854 in Missouri, the railroadsÔÇÖ history of growth and development has been well documented with surveyors and ÔÇťlocation engineersÔÇŁ leading the way. We will discuss why the courthouse is far from the only source of official records and why county level records often fail the surveyor.

One of the first things a surveyor usually consults is a right of way map for the railroad. These valuation maps (ÔÇťVal MapsÔÇŁ) that the surveyor covets are part of a federally mandated system of cadaster that most surveyors are not aware of that has huge amounts of supporting documents/ evidence that surveyors need to know and understand. The railroads were regulated and governed by the Interstate Commerce Commissions General Orders, which like the BLM Manual of Surveying Instructions, instructed how measurement, mapping and documentation was to be carried out. Key ICC General Orders that affect the surveyor the most will be provided and discussed. Where Federal Grant Railroad Rights-of-Way are involved, there were legislated maps and maps required by the General Land Office required to be filed. These GLO Filing Maps and the Railroad Land Grant Filing maps that came with them will be discussed in detail.

Railroads have learned over time that there are ways to limit risk and to control the environment they exist in by using license agreements / permits/ contracts, etc. and to minimize the use of easements where they can. Utility crossings, road crossings, encroachments, industry tracks and other use of railroad property is generally covered by license agreements and not an easement. These documents typically do not exist in the courthouse. Outlined will be what the surveyor needs to know about the railroad license contract system. In terms of where railroad corridors and highways intersect, the assumption of an easement may not hold true and the surveyor needs to know where he also needs to be looking. How do you know if a rail crossing is public or private and how do you document this?

Part 4 - Rails to Trails and Abandonment

Currently, one of the major headaches for surveyors continues to be the abandonment issue and growing out of that, the poorly understood rails to trails process since 1976. Presented to the attendees will be: 1. How do you tell if a rail line is abandoned? (Hint: Local Government does NOT dictate how rail lines are abandoned); 2. How do you tell if the line has been railbanked or has officially been converted to a rail trail? (There are far too many fraudulent rail/trail claims out there); 3. How do you document that the line is officially abandoned?; 4.Who owns the rail corridor at abandonment? (ÔÇťreversionÔÇŁ is not always the case); 5.Understanding the ÔÇťfederal exemptionÔÇŁ as applied to railroad corridors and why this supersedes state, county or local government rules. 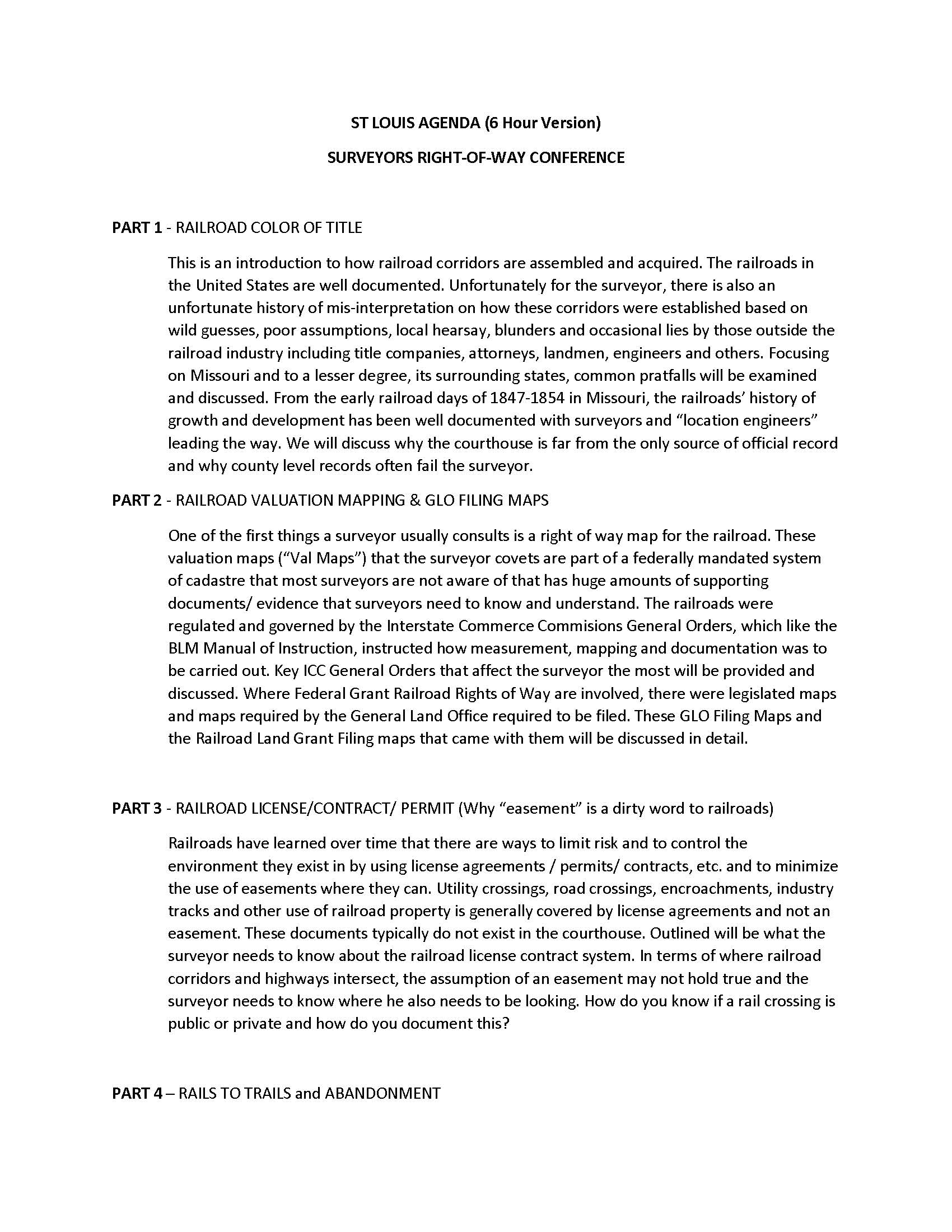 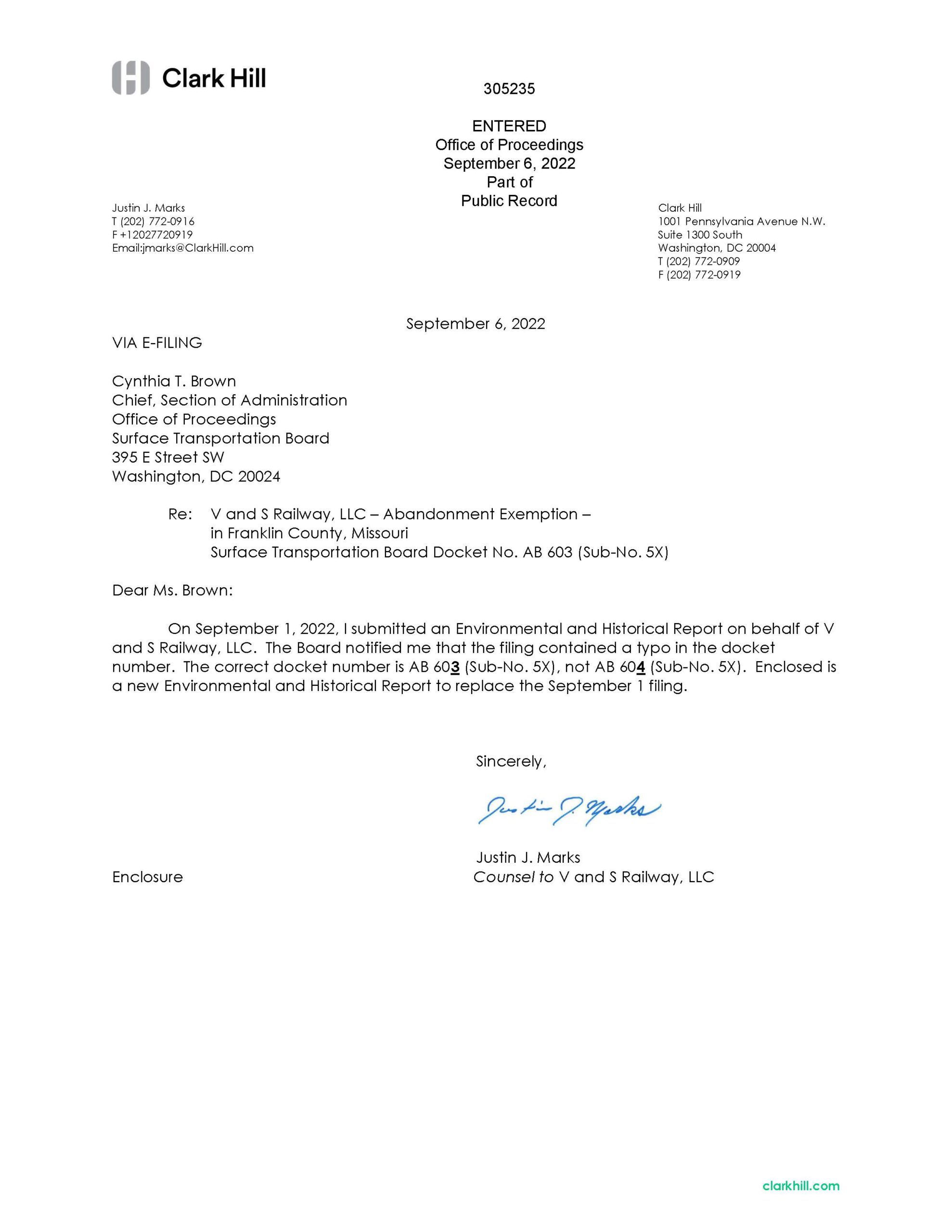 V&S Railway Begins Abandoning line in the State of Missouri – and Surveyors need to speak up about preserving the mapping or engineering records. 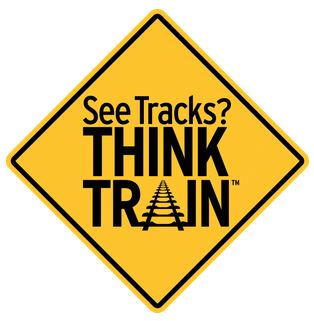 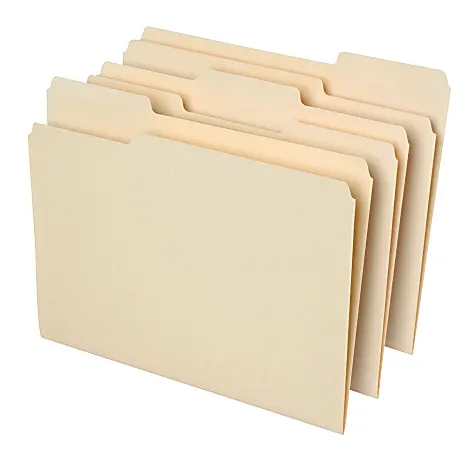 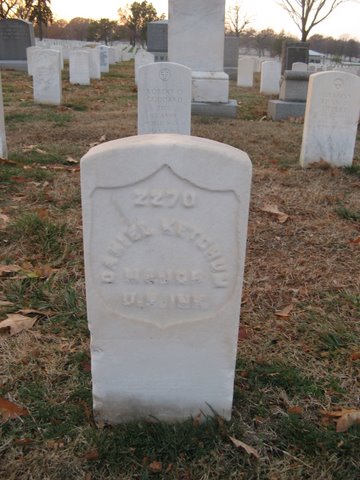 Daniel Ketchum: First commandant of the artillery school set up at Jefferson Barracks. The Army surveyors were instrumental in the adoption of the 100-foot babbit-faced chain and the adoption of the 100-ft chord curve definition for practical layout reasons. After the Civil War, the majority of all those railroad surveyors were Army trained ÔÇô and thus the quirk of the railroad curve being 100ÔÇÖ chord definition.┬á